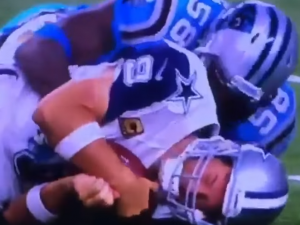 After breaking his collarbone three times since 2010, Dallas Cowboys quarterback Tony Romo elected to undergo a Mumford procedure on his left clavicle versus having a plate inserted into his collarbone.

The 2015 NFL season was a tough one for Romo who broke his clavicle twice in one season. The first time he broke his collarbone was on Sept. 20th against the Philadelphia Eagles where he missed seven games. During his second game comeback versus the Carolina Panthers on Thanksgiving Day, he suffered a hairline fracture of his left clavicle. That shoulder injury resulted in Romo missing the rest of the season and destroyed any hopes for a Playoff opportunity for the Cowboys.

A Plate vs. the Mumford Procedure

Based on the information we have, Dr. Struhl explains, “Given the fact that Romo had to choose between a “plate” and a Mumford procedure for his recurrent clavicle fracture, it is possible that the original fracture never healed properly. This is because distal clavicle fractures are notorious for not healing, because in addition to the fracture the coracoclavicular ligaments are usually partially or completely ruptured. This causes the fracture fragments to not align and heal. Also, if the instability of the clavicle is due to a partial or complete AC joint separation, then just a Mumford procedure may not be adequate to address the symptoms. An AC joint reconstruction is required either in addition or in place of the Mumford procedure.”

Another option for a Distal Clavicle Fracture

“For these cases the proximal clavicle needs to be stabilized and this is where the Double Endobutton technique would be a great option in either in addition to or in place of the Mumford procedure. These would fix the underlying problem and avoid having to use a plate.  The problem with the plate is that the fragment is so small sometimes that getting fixation is a huge issue”, elaborates Dr. Struhl.

Recovery from a Mumford Procedure

The recovery time expected for Tony Romo following the Mumford Procedure is between 6-8 weeks. For Cowboy fans, that means that Romo should be back participating with the team in May or June. Just in time for the 2016 sesaon to kickoff.