Scared to go under the knife for his ACL tear 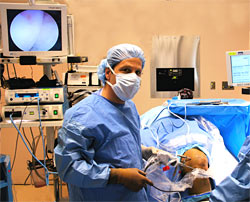 Stefan H. understands that some times one has to endure pain in order to get to the next level. From the expected pains you would expect a collegiate track and field athlete to experience to get to his level, one level of pain he was nervous about was to “go under the knife” for his ACL tear. In fact, he was so apprehensive that he waited a full year before he got his ACL surgery.

After his torn ACL from playing basketball in New York, he thought that he would rather wait and “hope” that his knee injury just needed time versus going under the knife. Unfortunately, based on his ACL symptoms and as time progressed he realized that he was unable to run, play basketball, or enjoy the other daily activities that were important to him.

“Enough was enough”, thought Stefan. So after talking to a variety of people to find someone he could trust with a scalpel he met with Dr. Steven Struhl. Dr. Struhl was able to provide Stefan with the information and a level of comfort that he had not experienced up to that point in trying to find the best Orthopedic knee Surgeon in NYC.

Stefan’s ACL reconstruction went better than he had planned. He was in and out the same day and was able to walk 3 weeks after surgery. He is able to play basketball again and looks forward to running through Central Park.

“I highly recommend Dr. Struhl. Trust me…coming from a person who was nervous about going under the knife. If you are at all nervous about having surgery, just meet with Dr. Struhl and his staff. I wish that I met him earlier, because then I would have had the surgery done sooner”, explains Stefan H..

Dr. Steven Struhl has two convenient locations to serve New Yorkers either in Manhattan or in Westchester County. He and his staff look forward to seeing how his expertise can help you get back to your active life.